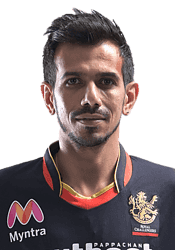 The mind of a chess player and the skill of a leg spinner - That's a dangerous combination that Yuzvendra Chahal possesses. Before taking cricket as the full-time profession, Chahal used to represent India internationally in chess at youth levels.

Chahal started playing for Haryana from a very young age and continues to represent them in the domestic circuit. His exploits in the domestic circuit earned him a contract from the Mumbai franchise for the 2011 edition of the Indian T20 League. In three years with the franchise, Chahal only played in one game in the competition and his best moment came during the 2011 Champions League T20 final against Bangalore as he picked up 2 for 9 in 3 overs, helping Mumbai win the trophy.

In the 2014 auction ahead of the Indian T20 League, Chahal was bought by the Bangalore franchise for his base price of INR 10 lakhs. Chahal would stay with the franchise till the 2021 season and would go on to become one of the premier spinners in the tournament that also helped in earning a spot in the national team in 2016. He was released by the franchise ahead of the 2022 mega auction in February and was bought by the Rajasthan franchise. He formed a potent alliance with Ravichandran Ashwin in that edition and also picked up a hat-trick in one of the games.

Chahal’s first taste of international cricket came when he was named in the 14-man squad to tour Zimbabwe in 2016. He made his international debut in an ODI match against Zimbabwe at the Harare Sports Club on June 11, 2016. In the second match, Chahal took three wickets for just 26 runs and led his side to victory. That earned him his first Player of the Match award in international cricket. On the same tour, Chahal made his debut in the shortest format of the game as well.

Soon Chahal started to settle down in his role in the national team, and then came a big moment for him when he became the first bowler for India to take a five-wicket haul in T20Is, ending with figures of 6/25 against England. That record also made him the first leg spinner ever to take a six-wicket haul in T20I history. The leggie continues with his success and also notched up yet another record, this time in ODIs as he took six wickets for 42 against Australia - these were the joint-best figures by an Indian bowler against the Aussies after Ajit Agarkar in 2003/04.

Later on, Chahal was named in India's squad for the 2019 Cricket World Cup. He ended his World Cup campaign with 12 wickets. In the last month of 2020, Chahal booked his name in the history books when he replaced Ravindra Jadeja as a concussion substitute in a T20I game against Australia and went on to win the Player of the Match award - the first concussion substitute to achieve this feat in an international cricket fixture.

Like most cricket players, Chahal also experienced a dip in form and was left out of the Indian squad for the 2021 T20 World Cup. The leggie though kept working hard and soon found his way back in the national team. Yuzvendra Chahal is a real character who has the courage to flight the ball, and also he doesn't shy away from showing his dancing skills on social media.