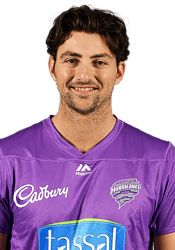 Tim David is a batting powerhouse who hails from Singapore but was brought up in Western Australia. He made his name in the cricketing fraternity by playing for multiple cricket franchises all over the globe. Before that, Tim David was handed a senior contract with Western Australia in 2018-19, however, he never made it to their squad.

After his rejection, he took up the shorter formats seriously, and his first appearance for Singapore was at the T20 World Cup qualifier in 2019, and he was one of the players to watch out for. After his noteworthy show at the qualifier, he was picked up by Hobart Hurricanes for the BBL in the 2020/21 season after he ended his contract with Perth Scorchers. In his first season with Hobart, he proved his worth by scoring 58 runs and earning the Player of the Match award. His contract with Hobart was then extended.

In the year 2021, offers started flowing for the power-hitter. He went on to represent Lahore Qalandars at the PSL and later was picked by Multan Sultans in 2022. He was acquired by Surrey for the T20 Blast and was roped in by Southern Brave for the Men’s Hundred competition. He was also bought in by Saint Lucia Kings for the CPL.

In 2022, Tim was purchased by Mumbai for the Indian T20 League, 2022. Although he was previously part of Bangalore squad in the second phase of the League in 2021, he only made his impact while playing for Mumbai.

Tim David kept knocking on the selector's door with his blistering show all over the globe. Not just David, but the full cricketing nation wanted him to eagerly be a part of Australia’s T20 format. All his hard work paid off in September 2022, when he was included in Australia’s T20I squad for the series against India where he made an immediate impact.