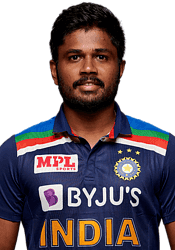 Sanju Samson is a right-handed wicket-keeper batsman and is considered to be one of the most gifted batsmen in Indian cricket. Samson sees himself as a top-order batsman and has an incredible ability to score briskly in an elegant manner.

Samson started his cricketing journey in Delhi but later moved to Kerala and worked on his game. He made his first-class debut for Kerala at the age of 17, in the year 2012. After an impressive debut season, he earned himself a spot in the U-19 Asia Cup squad. He caught the attention of the selectors on the back of successful outings in the domestic circuit. Samson made his T20I debut against Zimbabwe in 2015 but later found himself away from the national side and decided to focus on his growth.

Samson was picked by Rajasthan in 2013 to play in the India T20 League. Rahul Dravid always saw him as a batter with huge potential. When Rajasthan were banned for two seasons, Samson followed Dravid and joined Delhi for a couple of years, only to be back where he belongs.

Samson has shown tremendous growth with Rajasthan and hence the franchise decided to make him the captain of the side. He had a wonderful 2022 Indian T20 League season where he took his team to the final but failed to lift the trophy.

It was in 2022 against Ireland when Samson notched up his maiden half century in T20Is. He was also a part of the record-breaking partnership of 176 runs along with Deepak Hooda in that very game. Despite possessing great talent, Samson is yet to deliver to his true potential and his performances often leave a lot to be desired.