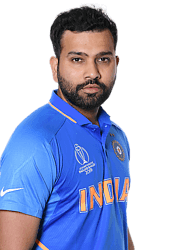 Rohit Sharma, popularly known as ‘Hit-Man’, only because of his ability to clear the boundary rope with ease. He is one of the best cricketers not just in India, but in the World. An elegant and stylish batter known for his awe-inspiring pull shots. It's often said that no one plays the shot better than he does. Very rightly said! Rohit Sharma comes from Nagpur in Maharashtra. He was raised by his grandparents in Mumbai and began playing cricket in a summer camp. He impressed his coach Dinesh Lad and immediately changed his school for better sporting facilities where Lad was the coach.

The swashbuckling batter started as an off-spinner but looking at his skills with the blade he was promoted to open the innings where he smashed centuries in school competitions. He made his List-A debut for West Zone in the Deodhar Trophy in 2006. In the same tournament, he scored an unbeaten 142 in a match against North Zone and came into the spotlight for the first time. He went on to make his first-class debut for India A against New Zealand A and also put on an impressive show there. Soon the same year he represented Mumbai in the Ranji Trophy and remained an integral part of their squad.

He was brought into India’s squad at a very early age. Just within a year of making his domestic appearance, he made his ODI debut in 2007 against Ireland and his T20I debut for India in the inaugural T20 World Cup in 2007. He was called as an emergency replacement for an injured in-form Yuvraj Singh, but he made the most of his opportunity. Against the likes of Ntini, Pollock and Morkel he notched up his half-century and announced himself in style.

As a result, he was roped in by Deccan Chargers for the Indian T20 League in 2008. He played two seasons for them and was then acquired by Mumbai in 2011. After another two seasons with them, he was named captain of their side in 2013. In his only first season as skipper, he helped Mumbai lift the trophy for the first time. Over the years, he has been the most successful skipper in the Indian T20 League. He helped Mumbai clinch the title 5 times, most by any team so far.

After making his ODI debut, a poor run of form in his initial years meant that he was dropped from the side. He also failed to make it into India’s World Cup squad in 2011. But proving his worth in the Indian T20 League in 2011, he was recalled to India’s ODI squad against West Indies. He did put on an impressive show but failed to display his magic in the following few series. However, the selectors continued to show faith in the talented young batter. MS Dhoni then decided to promote Rohit Sharma to open the batting, which changed his fortunes. India were struggling to find openers, but once Rohit was promoted to open that problem has been solved. This move from MS Dhoni turned out to be a masterstroke!

Rohit Sharma along with Shikhar Dhawan made a lethal opening pair. In the Champions Trophy of 2013, Sharma had a successful tournament and helped India lift the trophy that year. He cemented his spot as an opener in India’s white-ball squad. Over the years, Rohit has set a world record of smashing three double centuries in ODI cricket. The first of which came in 2013 against Australia, where he scored 209, and the next one came in 2014 against Sri Lanka at the Eden Gardens where he notched up the highest individual score in World Cricket. He amassed 264 runs in that game.

His third and final double hundred was once again against Sri Lanka in 2017 where he smashed 209 runs. The elegant right-handed batter was part of India’s World Cup Squad in 2015 and in 2019. In the mega event of 2019, Rohit Sharma scored 5 centuries and ended as the leading scorer of the tournament.

Talking about his red-ball cricket, Rohit Sharma received his maiden Test cap after more than 6 years of his making his first international appearance. He made his Test debut against West Indies in 2013 at Kolkata and scored a sublime 177 on debut. However, post that Rohit Sharma failed to score many runs in the format and was also in and out of the squad. He was always picked for away tours based on his home performance but he could not replicate the same outside the subcontinent.

Rohit Sharma was impressive on a tour to Australia in 2020-21 and the following tour to South Africa as well. Since then he has been India’s dependable opener in the longest format as well. After Virat Kohli's captaincy stint, Rohit Sharma was appointed as captain of India across all the formats.