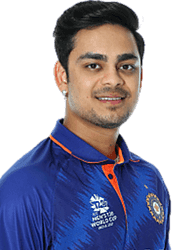 If we are to interconnect Jharkhand and cricket, the one invariable outcome that would come in all our minds is MS Dhoni. However, there is another lad, who is following the mighty MS in his footsteps. Ishan Kishan is not just a cricketer who hails from Jharkhand but just like Mahi, he is a promising wicket-keeper and a hard bludgeoner of the ball.

All this at the ripe age of 22 is a big positive indicator for India, as with more experience in the anvil, he can very truly become a non-negotiable fit in the Indian team. And just like Dhoni, he has displayed a possible potency to captain a team, by leading the India Under-19 side to the finals of the 2016 World Cup.

Although he did not impress with the bat in the tournament, he made up for the same by amassing a total of 799 runs in the following Ranji Trophy season. Kishan also achieved his career best of 273 in the same season, against Delhi, which was then the highest by any batter from Jharkhand.

Kishan has age very much on his side and some noteworthy knocks in the Indian T20 League has done his national aspirations a greater good. With Dhoni retiring from all forms of international cricket, Kishan stands a good opportunity to replace his senior in the side. But with competition from Pant and Rahul for the wicket-keeper’s position, Kishan will have to more than punch above his weight.

An explosive batsman by default, the Indian T20 League is a perfect setting for this young lad to stamp his name and presence among global heavyweights in the game. Kishan featured for Gujarat in 2017 and his decent run there earned him a goldmine in the auctions to follow for the next season.

Mumbai lapped him up for an astonishing 6.2 crores in the 2018 auctions. Although not very consistent with the bat initially, Kishan had a breakthrough season in 2020 where he top-scored for Mumbai and also got the opportunity to make his national debut in 2021. His price tag kept on increasing and in the 2022 mega auction, Ishan became only the second costliest Indian player after Yuvraj Singh as Mumbai spent INR 15.25 crore to reacquire his services.