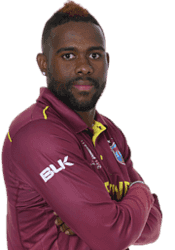 Dynamic with the bat, cunning with the ball and electric in the field, this is how you can define Fabian Allen. He is a utility all-rounder in the shorter formats and first caught the attention of the West Indian national selectors after his successful stint at the ICC U-19 World Cup in 2014. Soon he was drafted into the mainstream cricket when he made his First-Class debut in 2016 for his home team Jamaica.

Fabian's career suffered a setback when he met with a life-threatening accident in 2016 but he didn't let that affect his career. Three years down the line, he bounced back amazingly with a blazing knock against Sri Lanka at the 2019 World Cup, although in a losing cause. The potential is certainly there and if nurtured properly, Fabian Allen can be the next big thing in world cricket.