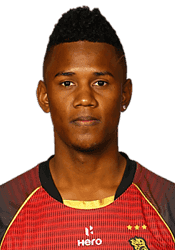 Akeal Hosein is a Trinidadian cricketer who represents West Indies and is a left-arm orthodox bowler. He has represented West Indies in the 2012 U-19 World Cup in Australia and made his first-class debut for Trinidad and Tobago during 2012-13 Regional Four Day Competition against Jamaica. The following season, in 2013-14, he was the Man of the Match in consecutive games where he registered figures of 6/33 and 5/34 against Windward Islands and later on scored his maiden first-class
hundred against the Leewards.

Hosein was picked to play for Barbados Tridents in the 2014 edition of the Caribbean Premier League. He represented the side till 2019 and then moved to Trinbago Knight Riders ahead of the 2020 season. He has been one of the most consistent performers in the CPL, being equally handy with the bat and a livewire on the field.